The initial scenario used is a 25 year old male just beginning to save for retirement at age 65, making withdrawals until death, and performing asset allocation using Stochastic Dynamic Programming (SDP) all as described more fully at the end of this posting. We record how rebalancing frequency and rebalancing band half width effect portfolio failure. Portfolio failure is defined as the portion of the individual's remaining lifetime for which they are insolvent.

The portfolio failure percentage when drawing returns at random form the historical record are shown below, with lines drawn to connect data points with the same rebalancing check frequency. 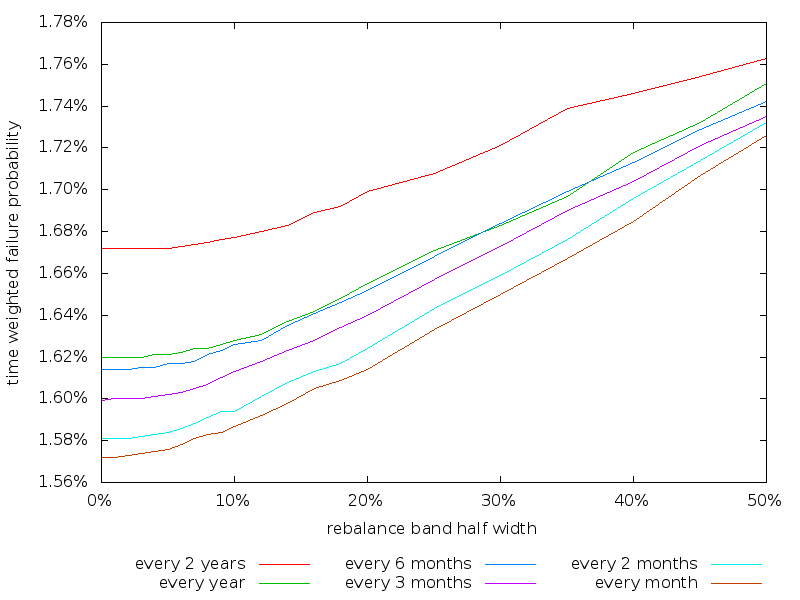 That was when selecting individual monthly returns at random.

Things get a lot more interesting when we evaluate rebalancing using returns sequences composed of 20 year blocks of data drawn from the historical record. This is shown below. 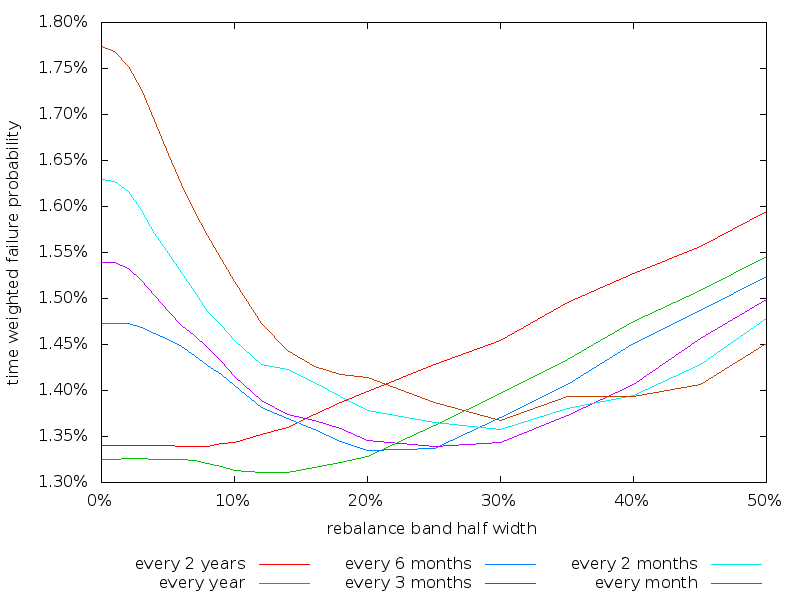 One possible explanation is momentum of some sort. Momentum has been well studied in individual stocks, but less so in aggregate asset classes. But the basic idea is clear. When the stock or bond market rises, it is likely to continue to rise. Rebalancing under such circumstances is likely to reduce the gains experienced. Similarly when the stock or bond market falls, it is likely to continue to fall. Rebalancing will only increase the losses. It is better to wait out the fluctuations of the market either by rebalancing less frequently or employing rebalancing bands.

Looking at the annual line, the best strategy appears to be to check annually and rebalance if an asset class differs from its target asset allocation by more than, say, 12-14%.

Also looking at the annual line, the failure rate for a 20% rebalancing band half width is 0.017% higher than the best value obtained. Estimating the life expectancy at age 25 as 56 years, this amounts to a mean expected 3 days of additional portfolio failure. Given rebalancing takes several hours to perform per year the portfolio loss associated with employing a 20% rebalancing band half width appears acceptable in this case.

Broadly similar results were obtained for a male age 65 with a $1m portfolio. Realance annually with a 12% rebalancing band half width if you want to be precise, or 16% if you are more lazy.

Aggregating these results gives the recommendation to rebalance annually with a 15% rebalancing band half width.

Scenario. We consider a male initially saving $2,000 at age 25, growing by 7% real per year, until age 65 at which point they retire and withdrawal a fixed real $50,000 per year. Money is added/withdrawn at the then current asset allocation. Longevity is as specified by the U.S. Social Security Cohort Life Tables for a person of the given initial age in 2013. Stock and bond market data for 1872-2012 are as supplied by Shiller (Irrational Exuberance, 2005 updated) without any adjustments being made. To evaluate each asset allocation scheme we generate 100,000 returns sequences using bootstrapping by concatenating together blocks of length 1 month or 20 years of monthly returns data chosen at random from the period 1927-2012. Rebalancing is performed at the indicated interval. No transaction fees. All calculations are adjusted for inflation. Taxes are not considered.

Platform: An internal command line version of AACalc.com was used to generate the SDP asset allocation maps and simulate the scenarios.