An Efficient Frontier for Non-normal Returns?

AACalc.com performs MVO and then assigns points on the MVO efficient frontier to the asset allocation map. For variable withdrawals, the resulting asset allocation maps frequently display a large region of relatively constant asset allocation, transitioning to the asset class with the highest return in the region where portfolio failure seems highly likely. And in the presence of leaving a bequest, for large portfolio sizes, transitioning again to the asset class with the highest returns. These transitions are understandable. The theoretical result that asset allocations are constant only applies if the utility function has constant relative risk aversion, and the presence of Social Security or other defined benefits for low portfolio sizes this is no longer true. On the other hand when things are going very well the diminishing utility of consumption means you reach a point where the linear returns of leaving a bequest outweigh investing for future consumption. What is hard to explain is why these transitions should be abrupt, and this the concern of the rest of this note.

The graph below shows an abrupt lower boundary when performing asset allocation amongst 3 asset classes with variable withdrawals as detailed more fully at the end of this note. The abrupt boundary is shown in the graph by an sudden transition from yellow to orange-red: 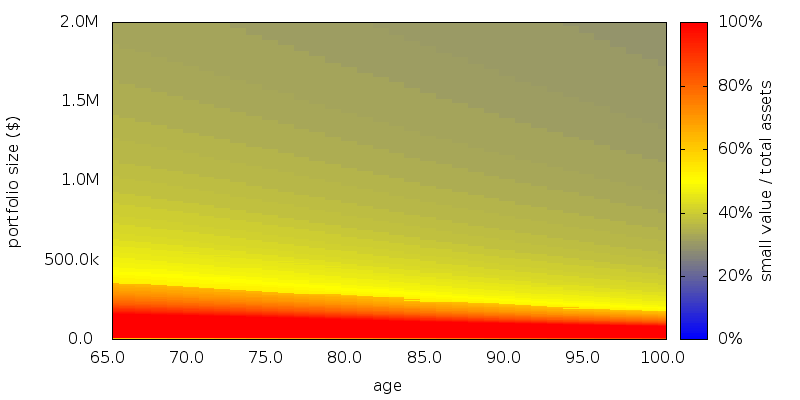 If instead of performing MVO we perform SDP on the entire multi-dimensional asset class space the abrupt lower boundary disappears: 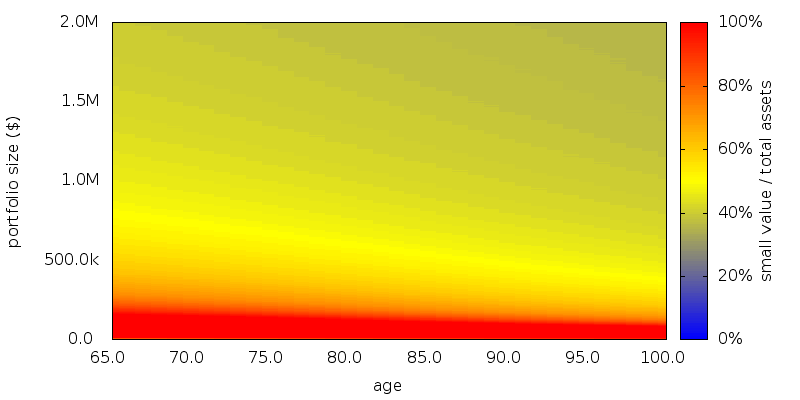 What is more when we evaluate how well this asset allocation map performs, it does slightly better than the MVO SDP map (lifetime certainty equivalence amount $52,114 versus $52,052 for SDP with MVO). This strongly suggests the MVO efficient frontier is sub-optimal for use by SDP.

Then there is the smoking gun. If we attempt to repeat the experiment using not actual historical returns but returns generated from a distribution having the same mean, standard deviation, and correlations as the actual historical returns, but normally distributed (produced using a Cholesky decomposition), the abrupt lower boundary disappears. Additionally the two lifetime certainty equivalence amounts are now the same to within the level of noise ($51,985 versus $51,984). Thus the non-normal nature of historical returns causes SDP alone to select points off of the MVO efficient frontier.

The mean return as a function of standard deviation of the points used by SDP alone, SDP with MVO, and the MVO efficient frontier are plotted below. The large number of points involved (56,385 map locations) causes the individual points to merge into thick lines. 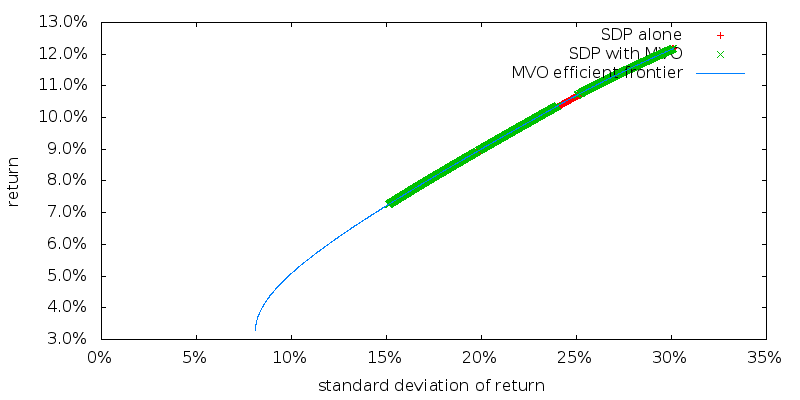 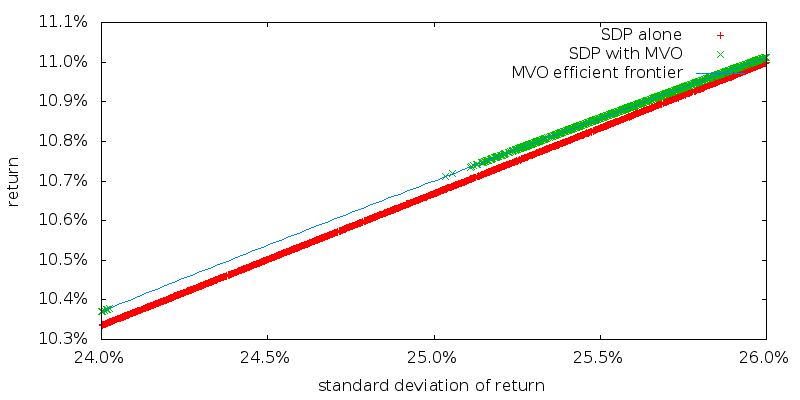 The asset allocations for SDP with MVO (these points lie on the MVO efficient frontier): 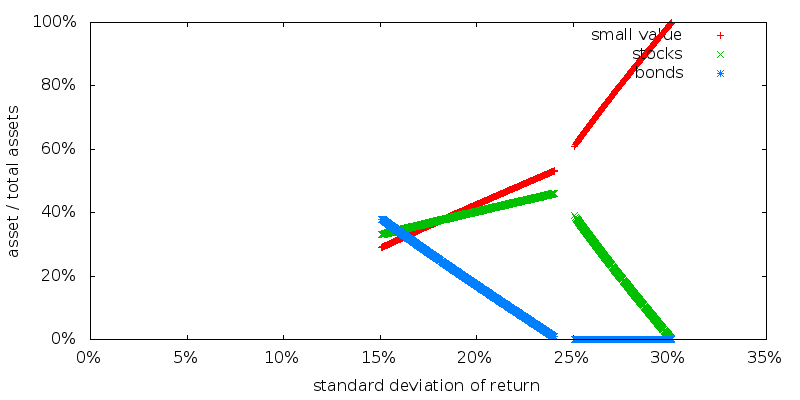 The gap that is apparent indicates that the relevant points on the MVO efficient frontier were not used by SDP, and this is consistent with the abrupt lower boundary.

The asset allocations for SDP alone (these points need not lie on any frontier): 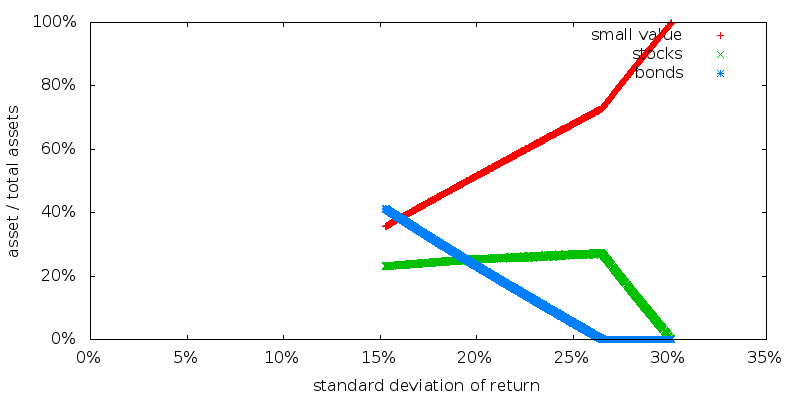 First, note the points do seem to lie on some sort of single frontier. They are not distributed at random, but form precise solid lines. And since SDP alone determines the optimal results it almost seems reasonable to describe this as an "efficient frontier". The efficient frontier for non-normal returns. Second note how different this frontier is from the MVO efficient frontier. 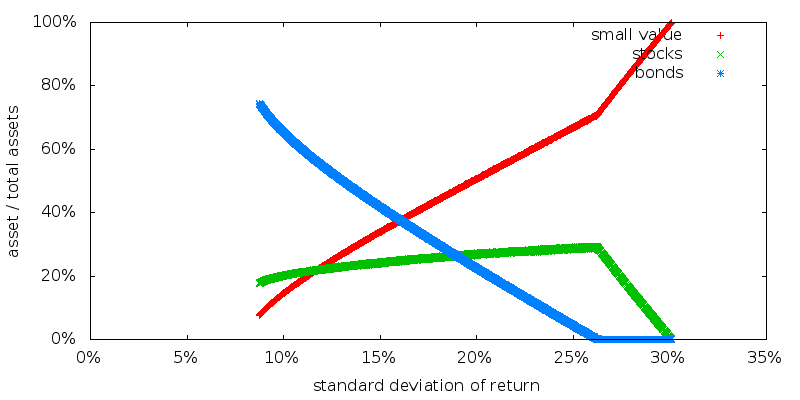 SO, there you have it. An apparent frontier for non-normal returns when using SDP alone that appears to be independent of the choice of consumption utility function. This frontier avoids the abrupt transitions seen by SDP with MVO, and gives better lifetime certainty equivalence performance suggesting it might be termed an efficient frontier. So far we do not know if either the frontier breaks down in other situations, or if there is a single frontier that SDP will always use. How to compute this frontier, other than through brute force SDP, is also not known.

Scenario. A retired male/female couple, both age 65 with a $500,000 portfolio. $20,000 of guaranteed Social Security income is assumed. Longevity is as specified by the U.S. Social Security Cohort Life Tables for a person of the given initial age in 2013. No value is placed on any inheritance that is left. No additions to the portfolio are permitted, and withdrawals are made using the current asset allocation. Taxes were ignored. No transaction costs were assumed for rebalancing, sales, or purchases. All amounts are adjusted for inflation. No time discounting of the future is performed.

Asset allocation schemes: Rebalancing is performed annually. Returns data for 1927-2012 were used by SDP to generate the schemes. A zero consumption level of $0 was used, with 0% phase out with increasing income.

Platform: An internal command line version of AACalc.com was used to generate the asset allocations, withdrawal strategies, and to simulate the portfolio performance.